TEMPE, Ariz. — When you strip away the NFL size, the eye-popping skills and the frenzied hype surrounding Arizona State freshman receiver N’Keal Harry, what’s left is a soft-spoken, respectful, introspective, hard-working delight of a young man.

To understand how that happened, you have to talk to Harry’s grandmother, Felna Harry. Nobody holds greater sway over coach Todd Graham’s biggest in-state recruit.

“She wants to make sure I’m not that type of guy that is always talking about myself or that’s always out there acting a fool,” Harry said Tuesday. “I’m really doing that for her because she’s always told me when I leave the house I’m a direct reflection of her and she always told me don’t embarrass her, or the name on the back of your jersey. So I make sure I’m remaining humble at all times.”

Harry’s grandmother has raised him since she moved with him off the tiny Caribbean island of Saint Vincent to the Valley when he was almost 4 (with her daughter’s and his mom’s blessing) to provide him with greater opportunities.

“Ever since he was creeping and crawling, there was always a ball around,” Felna Harry said. “Even when we were out walking, just give him a ball and he was a happy child.”

Ever since he open-enrolled at Tempe Marcos de Niza, and then transferred to Chandler High after his sophomore year, a football has been Harry’s ball of choice. That choice is already paying dividends for the Sun Devils.

Through three games, Harry has 15 receptions for 181 yards and two touchdowns, and two carries for 38 yards and another TD. He is only the second freshman in school history, joining D.J. Foster, to score touchdowns in his first three games. The latest came on 27-yard, one-handed grab three seconds before halftime at Texas, San Antonio on Friday to pull the Devils within 14-12 in a lackluster game they eventually won, 32-28.

“It was a big catch,” ASU receivers coach Jay Norvell said. “It was something we needed there before the half to give us momentum.” 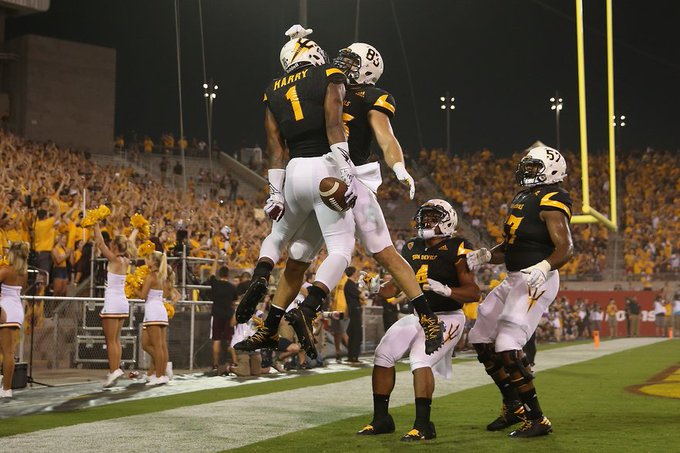 N’Keal’s size (6-foot-4, 220 pounds) is his most noticeable attribute. He hopes to model his game after former Detroit Lions receiver Calvin Johnson, who stood 6-foot-5 and weighed 235 pounds.

“He’s difficult to play man-to-man because he’s a big strong guy and he plays well to the ball; he’s got very good ball skills,” Norvell said. “Even when guys are bumping and running with him he’s strong enough to separate from them and make plays.

“We’re asking him to practice well and really learn how to be a great practice player so he can play at a high level during the game and play up to his potential. I don’t think he’s there. I think he’s got a lot of work to do. Even though he’s made some plays, he can do so much more. He needs to understand that, and we are putting a lot of pressure on him every day to do the things he needs to do to be special.”

N’Keal tried every sport under the sun as a kid: soccer, swimming, baseball, basketball and martial arts. Felna hoped he would choose something “less dangerous” than football, but she conceded to his wishes when he finally settled on football and then excelled in it.

“The only sport I got N’Keal into that he really didn’t want to do was karate,” Felna said. “I always thought he was doing too much but he wanted to go, go, go. He was like the Energizer Bunny, wanting to do this and that.”

Felna suspects that N’Keal’s diversity of sporting options has helped him become the athlete he is today, but she is crystal clear in highlighting his greatest attribute.

“It doesn’t just come from natural talent,” she said. “He has put in a lot over work over the years.”

So has Felna Harry. She worked (and still does) night shifts as a caretaker for Hospice of the Valley so that she had time to get N’Keal to and from school and all his sports. Initially, she was studying to become a nurse at Chandler-Gilbert Community College, but that changed when she realized the two weren’t compatible.

“I would sit there at practice with a book trying to study and at the end of the practice he would quietly come to me and say, ‘Grandma, did you see that catch I made?’ I would say ‘no’ and he would be crushed,” Felna said. “He wanted me to see what he was doing so I had to put my life on hold for him. It took a lot from me, but I did have a lot of help from his coaches.”

Among the mentors were T.J. Howard, his former AAU basketball coach, and Shaun Aguano, the head football coach at Chandler, both of whom N’Keal credits with helping replace the father he never really knew.

Since arriving at ASU, however, N’Keal said he has realized how much bigger his family is that he originally thought.

“Leaving your family behind and we’re kind of out here on our own — it’s opened my eyes a lot to see how much support I have; not just from family but from the island in general,” said N’Keal, who is dating Sun Devils women’s basketball player Kianna Ibis. “A lot of people from the island now are starting to watch football. I feel like I’m not just doing this for myself, I’m doing it for my family and I’m doing it for my country.”

N’Keal still keeps in touch with his mom by phone, but he hasn’t seen her in several years and hopes to make it back to St. Vincent soon to thank the many friends who follow his efforts on Facebook and search the island far and wide for venues that televise Arizona State football games.

“The people in St. Vincent work hard to get what they get,” N’Keal said. “That’s kind of where I get my work ethic from because all I know is my grandma working hard.

“When we first came to the United States, it was really rough because we had to start from the bottom. Just seeing her doing that was a great example for me. I’m thankful and I’m blessed that I got to see that because I believe that’s why I am the way I am today.”

Felna admits to a tinge of pride at N’Keal’s early accomplishments and all the media attention he is garnering, but she worries that her boy is growing up too fast and she can’t guide him like she once did when he lived with her in Chandler. It’s a common refrain for parents and grandparents, but it’s a reality that Harry’s teammates tell him it is time to embrace.

“What I told him when he got here is he doesn’t have time to be a freshman. He doesn’t have time to be 17, 18-years-old. He has to grow up,” quarterback Manny Wilkins said. “Coach Graham always says every year you have needs to be like your senior year. Every year that he’s here he needs to treat it like it’s going to be his last year; give it his all and continue to grow each week.

“He’s doing that. He’s staying humble, continuing to work hard and taking the steps each week that he needs to. He’s very talented and he’s built very well. As long as he continues to stay true to who he is, he’ll only get better and better.”