A £285m airport dubbed “the world’s most useless” has finally welcomed a commercial flight more than a decade after its construction was announced and almost a year after its official opening.

Sixty passengers flew into St Helena Airport, on the tiny British Overseas Territory in the middle of the Atlantic, last week.

The remote outpost is more than 1,200 miles from the nearest major landmass and around 810 miles from any other island. It is usually accessed via a five-night ocean crossing on RMS Saint Helena, one of the last working Royal Mail ships in the world.

The British government first announced plans to build an airport there in 2005, but problems finding a suitable construction firm and financial pressures brought on by the global recession meant contracts were not signed until 2011.

The airport officially opened in June 2016, but with a major proviso: large jets cannot land there due to dangerous winds. On April 18, 2016, a test flight operated by Comair for British Airways saw a Boeing 737-800 need three attempts to make a successful landing, and since June only small private planes have been cleared to use it. 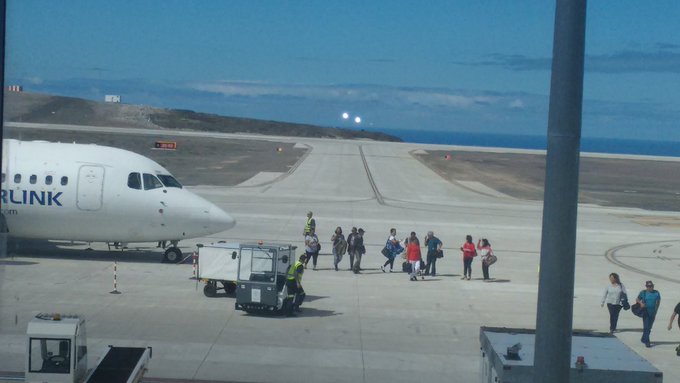 The saga has seen St Helena Airport, which cost the equivalent of nearly £63,000 for each of territory’s 4,534 residents, dubbed the “world’s most useless”.

An official report late last year said it was “staggering” that the impact of difficult weather conditions was not foreseen and described the airport as “a £285 million white elephant [that] serves neither its people nor the taxpayers footing the bill”.

The arrival of a first commercial flight from Cape Town on May 3, operated by SA Airlink using an Avro RJ86 and with 60 paying passengers on board, would appear to suggest an end to its misfortunes. However, the flight – delayed by an hour – was only run because two RMS St Helena voyages were cancelled, and the sailings have since resumed.

The opening of the airport was originally supposed to see the Royal Mail ship retired, and authorities in 2015 ambitiously estimated that up to 30,000 people a year could visit St Helena once air links were established.

St Helena suits lovers of unspoiled wilderness, nature and wildlife, walkers and, as the location of Napoleon’s imprisonment after the Battle of Waterloo, history buffs.

The climate is mild for much of the year, with temperatures hovering between 20C and 27C, and while English is the main language, the island’s cuisine has Malay and Chinese influences.

Gavin Bell visited back in 2011, on one of the RMS Saint Helena’s final sailings from Britain, and described his experiences for Telegraph Travel.

“While St Helena, with its historic buildings and friendly population, is well worth a visit, a voyage on the RMS is an experience in itself,” he said, going on to describe an officers’ performance of The Pirates of Penzance.

“Designed to carry cargo and 128 passengers in comfort and style, she is a rare vessel,” he added. “The only other like her sails from Tahiti to remote French Polynesian islands. The Queen Mary 2 is the only other ship bearing the Royal Mail title.

“The two RMS ships could not be less alike. There are no dancing girls on the Saint Helena (unless you count deckhands in pantomime drag), no big bands and no late-night casino. Entertainment is of the homegrown variety, from pub quizzes to deck quoits and cricket matches on the sun deck.

“But there is a sense of adventure that no big cruise liner can match, as she ploughs her way towards the lonely isle that was Napoleon’s last place of exile. When I sailed on her, the passengers included the widow of an island bishop returning to see a church built in her husband’s honour, and a South African eye surgeon with a ponytail who had been called to perform operations. There was also a retired pilot from Sussex keen to trace his ancestors, notably the fourth governor of the island, who was expelled by a Dutch invasion in 1672.”

Just 10 miles long and with a population of 4,255 at the 2008 census, St Helena is the second oldest remaining British Overseas Territory after Bermuda. It was discovered by the Portuguese in 1502 and was colonised by Britain in 1658 on the orders of Oliver Cromwell.

Napoleon died there in 1821, after six years in exile. His last residence, Longwood House, is now a museum.