Enlightened writer Guillaume Raynal attacked slavery in the 1780 edition of his history of European colonization. He also predicted a general slave revolt in the colonies, saying that there were signs of “the impending storm”. One such sign was the action of the French revolutionary government to grant citizenship to wealthy free people of colour in May 1791. Since white plantation owners refused to comply with this decision, within two months isolated fighting broke out between the former slaves and the whites. This added to the tense climate between slaves and guards blancs.

Raynal’s prediction came true on the night of 21 August 1791, when the slaves of Saint Domingue rose in revolt when thousands of slaves attended a secret Vodou (voodoo) ceremony as a tropical storm came in the lighting and the thunder was taken as auspicious omens-and later that night, the slaves began to kill their masters and plunged the colony into civil war. The signal to begin the revolt was given by Dutty Boukman, a high priest of Vodou and leader of the Maroon slaves, during a religious ceremony at Bois Caïman on the night of 14 August. Within the next ten days, slaves had taken control of the entire Northern Province in an unprecedented slave revolt. Whites kept control of only a few isolated, fortified camps. The slaves sought revenge on their masters through “pillage, rape, torture, mutilation, and death”. The long years of oppression by the slave masters had left many blacks with a hatred of all whites, and the revolt was marked by extreme violence right from the very start as the masters were dragged from their beds to be killed and the heads of French children were placed on spikes that were carried at the front of the rebel columns. Since the plantation owners had long feared such a revolt, they were well armed and prepared to defend themselves. Nonetheless, within weeks, the number of slaves who joined the revolt reached some 100,000. Within the next two months, as the violence escalated, the slaves killed 4,000 whites and burned or destroyed 180 sugar plantations and hundreds of coffee and indigo plantations. At least 900 coffee plantations were destroyed and the total damage inflicted over the next two weeks amounted to 2 million francs. In September 1791, the surviving whites organized themselves and struck back, killing about 15,000 blacks in an orgy of revenge. Through demanding freedom from slavery, the rebels did not demand independence from France at this point, and most of the rebel leaders professed to be fighting for the king of France, who it was alleged had issued a degree that had been suppressed by the governor freeing all the slaves, and as such they were demanding their rights as Frenchmen which been granted by the king. 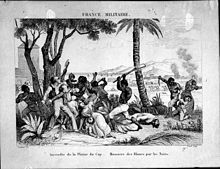