(CNN)Hurricane Irma strengthened to a Category 4 storm Monday, churning west in the Atlantic Ocean and prompting emergency declarations in Florida and Puerto Rico.

Although Irma’s path remains uncertain, the possibility it could threaten the United States led Florida Gov. Rick Scott to declare a state of emergency in all 67 counties in his state.
“In Florida, we always prepare for the worst and hope for the best, and while the exact path of Irma is not absolutely known at this time, we cannot afford to not be prepared,” Scott said in a statement released late Monday afternoon. “This state of emergency allows our emergency management officials to act swiftly in the best interest of Floridians without the burden of bureaucracy or red tape.”
Scott said on Twitter he spoke to President Donald Trump Monday night. He said Trump “offered the full resources of the federal government as Floridians prepare for Hurricane Irma.”
The governor of Puerto Rico, Ricardo Rosselló, declared a state of emergency Monday and activated the National Guard. Hours later, the National Hurricane Center issued a hurricane warning for Puerto Rico.
Classes will not be held on Tuesday in the public education system nor in the University of Puerto Rico, according to a release from the governor’s office. Rosselló warned the public on Sunday that the island could feel Irma’s wrath around noon Wednesday.
As of 11 p.m. ET, Monday, Irma was about 410 miles (660 kilometers) east of the Leeward Islands, the National Hurricane Center said. It is packing maximum sustained winds of 140 mph (220 kph) as it heads west at 13 mph (20 kph). Landfall is expected early Wednesday on the island of Anguilla.
Computer models show the system moving through the Caribbean, and by the end of the week, it will turn right toward the north, said CNN meteorologist and weather anchor Tom Sater.
“There is a small window. If it turns sooner rather than later, we could maybe see the system slide by the East Coast into the ocean, but that window is shutting quickly,” Sater said. “It definitely looks like we will be impacted by a major hurricane that is a Category 3, 4 or 5.”
TRACK THE STORM HERE
View image on Twitter 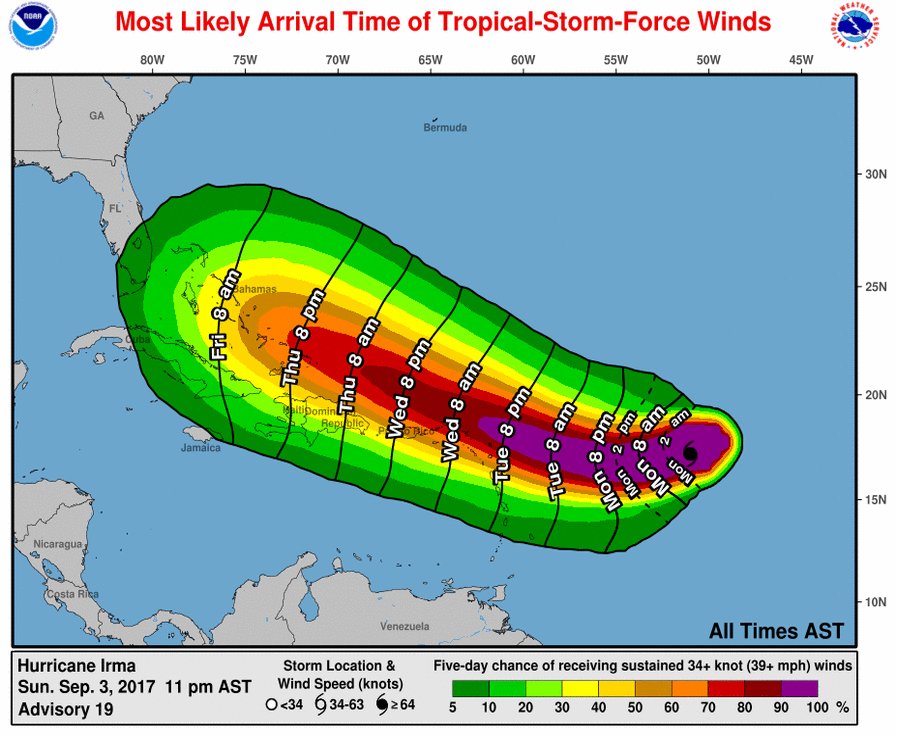 The hurricane center said swells generated by Irma would begin impacting the northern Leeward Islands on Monday.
“These swells are likely to cause life-threatening surf and rip current conditions,” the hurricane center said.
In addition to Puerto Rico, a string of Caribbean islands are now under hurricane warnings, including Antigua, Barbuda, Anguilla, Montserrat, St. Kitts, Nevis, Saba, St. Eustatius, St. Martin/Sint Maarten and St. Barts, the hurricane center said.
“A hurricane warning means that hurricane conditions are expected somewhere within the warning area,” the hurricane center said. “A warning is typically issued 36 hours before the anticipated first occurrence of tropical-storm-force winds, conditions that make outside preparations difficult or dangerous. Preparations to protect life and property should be rushed to completion.”
And Irma will only strengthen this week, CNN meteorologist Allison Chinchar said. “Over the coming days, it’s going to get into that warmer water. That’s going to help the storm intensify.”

Hurricane Irma expected to gain strength, size 01:51
Irma is expected to remain a “dangerous major hurricane” through the week and could directly affect the British and US Virgin Islands, Puerto Rico, Hispaniola, Turks and Caicos, and the Bahamas, the agency said.
Puerto Rico’s disaster management agency, AEMEAD, is monitoring Irma and has opened an information hotline.

It’s too soon to know the impact Irma could have on the continental United States, where no warnings or watches are in effect.
“Regardless, everyone in hurricane-prone areas should ensure that they have their hurricane plan in place, as we are now near the peak of the season,” the hurricane center said.
Chinchar said Irma could affect not just the eastern coast of Florida, but also farther up the East Coast.
“If there was a US landfall, we’re talking a week from today,” Chinchar said Monday.
Gov. Scott urged the state’s residents to ensure their disaster supply kits were ready. “Disaster preparedness should be a priority for every Florida family,” he tweeted Sunday
Read: Hurricane Irma could be next weather disaster

Why Irma could be especially intense

Irma is a classic “Cape Verde hurricane,” meaning it formed in the far eastern Atlantic, near the Cape Verde Islands (now known as the Cabo Verde Islands), before tracking all the way across the Atlantic, CNN meteorologist Brandon Miller said.
And Cape Verde storms frequently become some of the largest and most intense hurricanes. Examples include Hurricane Hugo, Hurricane Floyd, and Hurricane Ivan.