The French Revolutionary Wars were a series of sweeping military conflicts, lasting from 1792 until 1802, resulting from the French Revolution. They pitted the French First Republic against Britain, Austria and several other monarchies. They are divided into two periods: the War of the First Coalition (1792–97) and the War of the Second Coalition (1798–1802). Initially confined to Europe, the fighting gradually assumed a global dimension. After a decade of constant warfare and aggressive diplomacy, France had conquered a wide array of territories, from the Italian Peninsula and the Low Countries in Europe to the Louisiana Territory in North America. French success in these conflicts ensured the spread of revolutionary principles over much of Europe.

As early as 1791, the other monarchies of Europe looked with outrage at the revolution and its upheavals and considered whether they should intervene, either in support of King Louis XVI, or prevent the spread of revolution, or take advantage of the chaos in France. Anticipating an attack, France declared war on Prussia and Austria in the spring of 1792, and they responded with a coordinated invasion that was eventually turned back at the Battle of Valmy in September. This victory emboldened the National Convention to abolish the monarchy. A series of victories by the new French armies abruptly ended with defeat at Neerwinden in the spring of 1793. The French suffered additional defeats in the remainder of the year, and these difficult times allowed the Jacobins to rise to power and impose the Reign of Terror to unify the nation. 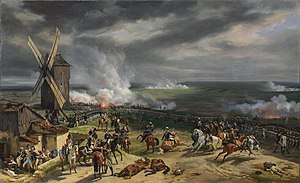 In 1794, the situation improved dramatically for the French, as huge victories at Fleurus against the Austrians and at the Black Mountain against the Spanish signalled the start of a new stage in the wars. By 1795, the French had captured the Austrian Netherlands and knocked Spain and Prussia out of the war with the Peace of Basel. A hitherto unknown general named Napoleon Bonaparte began his first campaign in Italy in April 1796. In less than a year, French armies under Napoleon decimated the Habsburg forces and evicted them from the Italian peninsula, winning almost every battle and capturing 150,000 prisoners. With French forces marching towards Vienna, the Austrians sued for peace and agreed to the Treaty of Campo Formio, ending the First Coalition against the Republic.

The War of the Second Coalition began with the French invasion of Egypt, headed by Napoleon, in 1798. The Allies took the opportunity presented by the French effort in the Middle East to regain territories lost from the First Coalition. The war began well for the Allies in Europe, where they gradually pushed the French out of Italy and invaded Switzerland—racking up victories at Magnano, Cassano, and Novi along the way. However, their efforts largely unravelled with the French victory at Zurich in September 1799, which caused Russia to drop out of the war. Meanwhile, Napoleon’s forces annihilated a series of Egyptian and Ottoman armies at the battles of the Pyramids, Mount Tabor, and Abukir. These victories and the conquest of Egypt further enhanced Napoleon’s popularity back in France; he returned in triumph in the fall of 1799. However, the Royal Navy had won the Battle of the Nile in 1798, further strengthening British control of the Mediterranean.

Napoleon’s arrival from Egypt led to the fall of the Directory in the Coup of 18 Brumaire, with Napoleon installing himself as Consul. Napoleon then reorganized the French army and launched a new assault against the Austrians in Italy during the spring of 1800. This brought a decisive French victory at the Battle of Marengo in June 1800, after which the Austrians withdrew from the peninsula once again. Another crushing French triumph at Hohenlinden in Bavaria forced the Austrians to seek peace for a second time, leading to the Treaty of Lunéville in 1801. With Austria and Russia out of the war, the United Kingdom found itself increasingly isolated and agreed to the Treaty of Amiens with Napoleon’s government in 1802, concluding the Revolutionary Wars. The lingering tensions proved too difficult to contain, however, and the Napoleonic Wars began a few years later with the formation of the Third Coalition, continuing the series of Coalition Wars.