The First Carib War (1769 – 1773) was a military conflict between the Carib inhabitants of Saint Vincent and British military forces supporting British efforts at colonial expansion on the island.

Led primarily by Black Carib chieftain Joseph Chatoyer, the Caribs successfully defended the windward side of the island against a military survey expedition in 1769 and rebuffed repeated demands that they sell their land to representatives of the British colonial government. Frustrated by what they saw as intransigence, the British commissioners launched a full-scale military assault on the Caribs in 1772 with the objective of subjugating and deporting them from the island.

British unfamiliarity with the windward lands of the island and effective Carib defence of the island’s difficult mountain terrain blunted the British advance, and political opposition to the expedition in London prompted an enquiry and calls for it to be ended. With military matters at a stalemate, a peace agreement was signed in 1773 that delineated boundaries between British and Carib areas of the island. 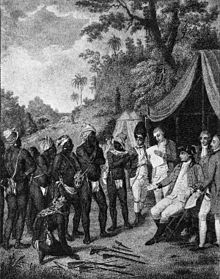 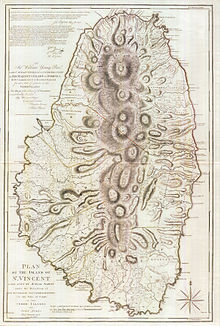